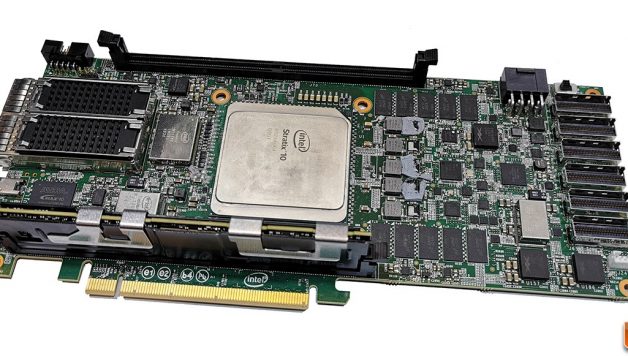 Today in this guide we will look at some of the advantages of Intel Arria 10 GX. Some of the advantages of Intel Arria GX are that it has enhanced core architecture. The supporting feature for enhanced core architecture is that it is built on TSMC’s 20nm process technology; it has 60% higher performance compared to the previous generation of mid-range FPGAs. It has a 15% higher performance compared to the fastest previous-generation FPGA. The next benefit is that of high-bandwidth integrated transceivers in which the supporting features are short-reach rates up to 25.8 Gigabits per second (Gbps) and a backplane capability up to 17.5 Gbps and it also consists of integrated 10GBASE-KR and 40GBASE-KR4 Forward Error Correction (FEC).

Before we look into the benefits of the Arria 10 GX PCIe board and its features, let’s look at some more benefits of the Arria 10 device family – One of the benefits is improved logic integration and hard IP blocks. Its supporting features comprise the 8-input adaptive logic module (ALM), then it has up to 65.6 megabits (Mb) of embedded memory, then variable precision digital signal processing (DSP) blocks, apart from that fractional synthesis phase-locked loops (PLLs). It consists of hard PCI express Gen3 IP blocks, apart from that, it also has a hard memory controller and PHY up to 2,666 Megabits per second (Mbps).

Benefits of the Arria 10 Device –

The third benefit of the Arria 10 family is that of a Second-generation hard processor system (HPS) with an integrated ARM* Cortex*-A9* MPCore* processor. Its supporting features are a tight integration of a dual-core ARM Cortex-A9 MPCore processor, hard IP, and an FPGA in a single Arria 10 system-on-a-chip (SoC). It mainly supports over 128 Gbps peak bandwidth with integrated data coherency between the processor and the FPGA fabric. The fourth benefit is that of Advanced power savings. The supporting feature for the same is a Comprehensive set of advanced power-saving features, then it also consists of power-optimized multi-track routing and core architecture. And, up to 40% lower power compared to the previous generation of mid-range FPGAs. Plus, up to 60% lower power compared to the previous generation of high-end FPGAs.

In Intel Arria 10 the XpresGXA 10-LP1115 is a low profile PCIe network processing FPGA board and it features 40G Ethernet. The Target applications are as wide as security and network, acceleration, finance, fog computing, and others. Some of the features and advantages of the same are a low-profile PCIe board using Intel® Arria® 10 GX 1150 KLE, it also has a single slot passive cooling for servers and it is designed for fog computing and ultra-low latency applications., PCIe Gen3 x8 interface, 8 GB onboard DDR4 (x 72bit), QSFP+ cage 10/40 GbE ports. It has a Board Management Controller (BMC) and 10 transceiver expansion ports with a 10 GPIO expansion port.

Let’s look at the technical specifications – The FPGA Configuration is –

Then comes the Memory –